…about the creative and technical aspects of shooting the new Mercedes Benz CLS with a full rigged Motion- Control- Studio Environment in Berlin located Hangar Studios. Read the case study.

“The new CLS” was conceived by the customer and the creative team as an emotional, indulgent journey across the lines of an iconic design. The new CLS is an ultra-modern car, but part of a long tradition of very successful luxury cars as well. Since special aesthetics are essential to the CLS and its discerning fans, the film was to realize an emotional celebration of the design. Director James Coton’s main idea was to use split screens, which connect key design elements in concerted tracking shots, creating a new, almost abstract aesthetic, or ones that connect drives that come to a common end from different source frames.

The use of motion control was part of the concept from the beginning, because it was clear to the creative team that both the precision and complexity of the journeys and the requirement for identical final images could only be realized in this way. The Berlin studio Hangar (hangar.de), which is operated by visavis Filmproduktion (visavisfilm.de) just like the Berlin motion control rental mastermoves (mastermoves.de), offers the best conditions for such a project. Not only are various MRMoCo rigs (Milo Long Arm, Talos, Modula Rig, Ulti Head, SFH 30, modelmover) available, but the studio itself has two additional, permanently installed motion control resources: a floor-level turntable (5m diameter, 8 t load capacity) and a huge, height-variable spin rig on the ceiling (12m diameter). Both are equipped with Axis Cards from MRMoCo and can thus be operated together with camera rigs in a variant of the “Flair” software. So it is possible to synchronize the turntable action or the movement of lights on the ceiling completely and frame-accurately with e.g. Milo moves. It is also possible to deconstruct complex moves that go arbitrarily beyond the limit of the 90° cove in Maya in such a way that the camera always looks into the sweet spot of the cove and the turntable executes the move as if the camera were moving around the object. To adequately implement the necessary movement of the light, the Spin Rig on the ceiling can accept exactly the same motion data as the Turntable, but of course can also be programmed independently. Thus, the studio has become a top address for complex car shoots in Europe, also due to a number of other high-quality and motorized moving truss constructions as well as the possibility of 360° rotating Molton curtains in black, green or blue.
With large, heavyweight clients like Mercedes Benz, it is also essential that extremely high security precautions are taken to ensure that no footage or other information leaks out for prototypes or pre-launch models. To this end, the German automotive industry has developed a certificate that is only issued after an elaborate approval process. This includes, quite simply, that the pizza delivery man arrives in a lock and cannot take a look inside the studio, but also, of course, an exclusive alarm system and, very importantly, the security of the studio’s Internet connections. Hangar.de has this certificate, otherwise such productions as the CLS- Shoot would not take place there.

For this project, there was early contact with the production Tempomedia, the director James F. Coton and the DOP Nicolai Niermann. Thus, the treatment and later the storyboard were constantly specified and developed in close communication based on the technical possibilities. In this case, as usually in real life, it was not a matter of visionary maximum demands, but of intelligent interlacing with a rather tight time budget. Due to these external conditions, only a small part of the interior shots could be realized with MoCo, as this would have required a different rig and thus another day of shooting. The production then decided to realize most of the interior shots with a motorized slider. This means that all exterior shots had to be done in one day, i.e. programming and shooting of about 30 sequences in one day. So it was essential in the advance planning to understand what exactly the creative focus was, but at the same time to allow as much freedom of movement as possible on the shooting day, so that shots could be generated practically in passing in a creative, playful atmosphere. To achieve this, from a motion control perspective, it was important to anticipate the foreseeable problems from the outset and proactively propose solutions. Therefore, I set up the studio situation in Maya beforehand to pre-visualize the optimal position of the rail, the necessary focal lengths and the structural situation for the light.
We chose the Milo Long Arm as the rig to be able to place the rail as far away from the car as possible to minimize reflections. To avoid shakes in this large delivery, everything was shot at about 8fps, slower if needed.
During the shoot, the most important thing was to have several parameters in mind at the same time for the desired settings, in order to be able to make working offers very quickly for the many shots. The parameters were, for example: How must the car be rotated for the necessary angles to be best in the bounce, and how for the background? How can a complex movement be simplified using the turntable so that we generate only 2 keyframes if possible? How can we make creative offers that meet the intentions of the creatives, but at the same time are easy and quick to implement? In fact, we succeeded in doing all this very well, thanks to good and precise preparation, but also because of our long experience. Although “All roads lead to Rome,” there are many detours, the shortest path is the one that needs to be found.

As a motion control supervisor/operator, I actually rarely get calls from the editing room, but in this case it actually happened. There had been some discussion about whether or not the Milo Longarm had actually been telecopable. So we can probably assume that although the technology was not fully remembered in its construction, this memory must have been a good one overall.

Have a look on some BTS Photography I was allowed to do. 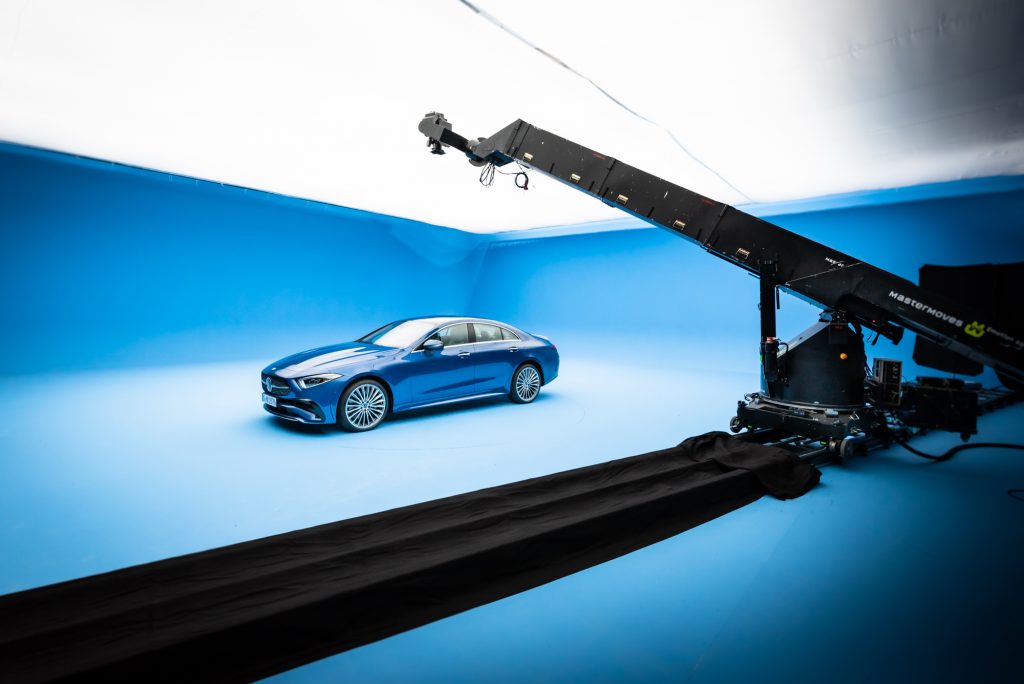 Try 3 different dogs to resist panic made by a Milo…